In this laboratory investigation, you will use BLAST to compare several genes, and then use the information to construct a cladogram.  A cladogram is treelike, with the endpoints of each branch representing a specific species.  The closer two species are located to each other, the more recently they share a common ancestor.  In the cladogram below, you will also see the shared derived characters.  Note that the placement of the shared derived character corresponds to when (in a general, not a specific sense) that character evolved; every species above the character label possesses that structure.

2)  A team of scientists has uncovered the fossil specimen shown below in Figure 2 near Liaoning Province, China.  Make some general observations about the morphology of the fossil, and then record your observations in your notebook.

3)  Little is known about the fossil.  It appears to be a new species.  Upon careful examination of the fossil, small amounts of soft tissue have been discovered.  Normally soft tissue does not survive fossilization; however, rare situations of such preservation do occur  Scientists were able to extract DNA nucleotides from the tissue and use the information to sequence several genes. Your task is to use BLAST to analyze these genes and determine the most likely placement of the fossil species on the cladogram shown below in Figure 3. 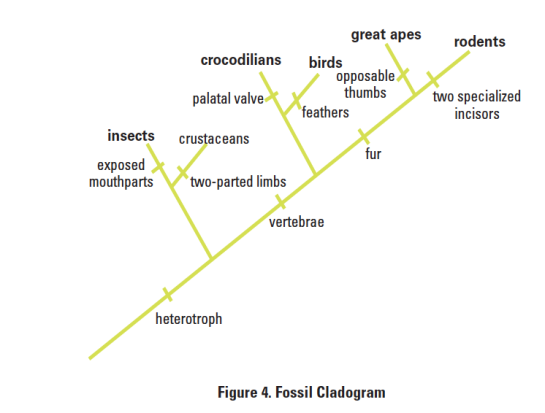 Step 1 Form an initial hypothesis as to where you believe the fossil specimen should be placed on the cladogram based on the morphological observations you made earlier. Draw your hypothesis on Figure 4.

Step 3 Upload the gene sequence into BLAST by doing the following:
a.     Go to the BLAST homepage: http://blast.ncbi.nlm.nih.gov/Blast.cgi
b.     Click on “Saved Strategies” from the menu at the top of the page. 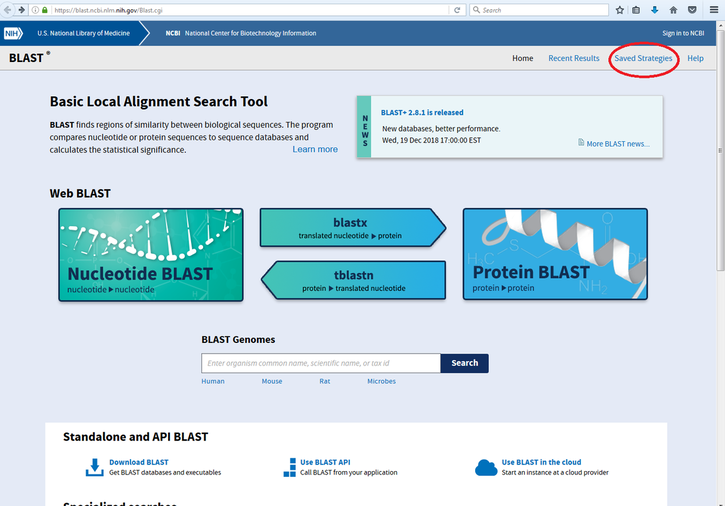 c.  Under "Upload Search Strategy,"  click on "Upload File" and locate one of the gene files you saved onto your computer.
d.  Click "View."

e.     A screen will appear with the parameters for your query already configured. NOTE: Do not alter any of the parameters. Scroll down the page and click on the “BLAST” button at the bottom.

f.  After collecting and analyzing all of the data for that particular gene (see instructions below), repeat this procedure for the other two gene sequences.

6)  The results page has two sections.  The first section is a graphical display of the matching sequences. 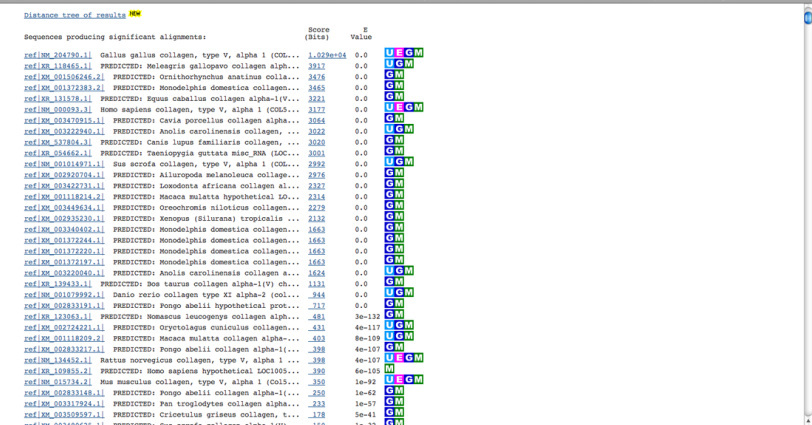 Analyzing Results: Recall  that species with common ancestry will share similar genes.  The more similar genes two species have in common, the more recent their common ancestor and the closer the two species will be located on a cladogram.  As you collect information from BLAST for each of the gene files, you should be thinking about your original hypothesis and whether the data support or cause you to reject your original placement of the fossil species on the cladogram.

For each BLAST query, consider the following:

Designing and Conducting Your Investigation

Now that you’ve completed this investigation, you should feel more comfortable using BLAST. The next step is to learn how to find and BLAST your own genes of interest. To locate a gene, you will go to the Entrez Gene website (http://www.ncbi.nlm.nih.gov/gene). Once you have found the gene on the website, you can copy the gene sequence and input it into a BLAST query.
Example Procedure
Your starting question may be: What is the function of actin in humans? Do other organisms have actin? If so, which ones?
Below is a list of some gene suggestions you could investigate using BLAST. As you look at a particular gene, try to answer the following questions:
Suggested Genes:


Or, if you're looking for other suggestions, click on HERE to visit the Human Protein Reference Database.